Home/Whale Watching In Maui
Previous Next 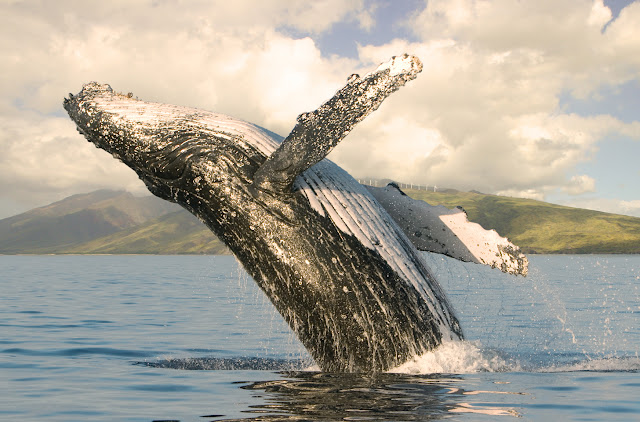 Each year, we celebrate the long awaited return of our beloved humpback whales. The humpback whales are a revered and respected island treasure.  People travel from around the world to witness this annual event and to enjoy whale watching in Maui.
Evidence of the importance of the humpback whale (the Kohola) in Hawaiian culture has been found in ancient Hawaiian petroglyphs found on many of the islands in the Hawaiian island chain.  It has been estimated that the humpback whale has been traveling to Hawaii since the Polynesian Era (1-600 AD). The petroglyphs showing the whales importance in ancient culture can be found at Palaoa Hill on Lanai, Olowalu on Maui, and Pohue on the Big Island.
Representations of the stories and legends of the whale are seen throughout Hawaiian culture; in wood carvings, artwork, artifacts, poetry, chants, and musical instruments. Ancient whale tooth necklaces have been found which anthropologists believe were only allowed to be worn by Hawaii’s chiefs and royalty.
In Hawaiian mythology, the Humpback Whale is believed to be the ancestors of Hawaii’s people, and a powerful representation of Kanaloa, the god of the sea and its creatures. 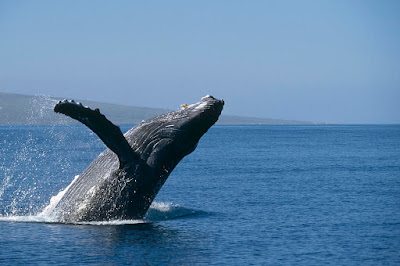 The height of whale season runs late November thru the end of April each year. Although humpback whales inhabit all major oceans, the North Pacific Humpback Whale population travel from the coast of California and from the cold Alaskan waters of the Bering Sea to arrive at the subtropical climate and warm water of the Hawaiian oceans. Scientists have estimated the whale’s journey one way can take as long as 4 to 6 weeks. Some whales have been tracked making the journey in a little over one month. On average, 8,000 to 10,000 whales visit Hawaii each year, and this number is growing as the population increases. They come here to breed, give birth, and to provide a safe environment to raise their young calves.  Hawaiian waters offer greater underwater visibility and the lack of natural predators make it a perfect sanctuary for the whales. 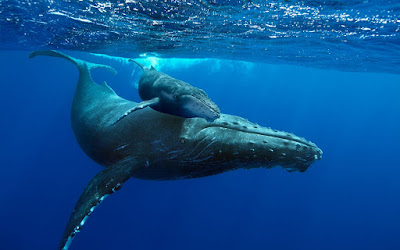 The gestation period of a humpback whale is 11-12 months, so in theory, a calf can be conceived in, then birthed in Hawaiian waters. A newborn whale calf averages 13-16 feet in length and weigh 2,000 pounds. Humpback whale mothers are extremely affectionate, playful, and protective of their calves. Calves are weaned from their mothers within 4 to 6 months of age. It is not uncommon to have the amazing experience of sighting numerous mother and calves frolicking in our waters. 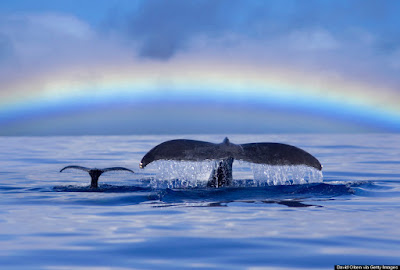 As the seasons move into the first part of Spring, you can see the growing calves playing and surfacing. As the calves play and dive, they are learning critical skills which ensures their survival as they grow into adulthood. 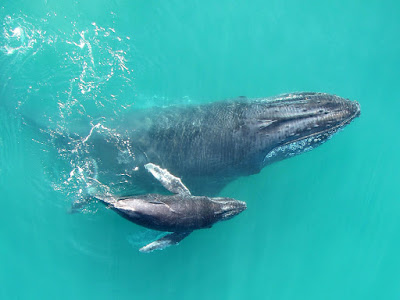 While out on the beautiful open sea enjoying these majestic creatures, here are just a few of some commonly seen whale behaviors to look for:
BLOW –  Although adult humpback whales can stay submerged for up to 45 minutes, they usually come to the surface for air every 10-15 minutes. Calves will surface every 3-5 minutes.  The best way to first sight a whale is to look for the “blow spray” as they rise above the surface.
PECTORAL SLAP –  Humpbacks slap one of their pectoral fins (or both in alternating movements) against the surface. This is believed to be a form of communication between whales.
SPY HOP – Also called a “head rise”, this is when just the whale’s head comes up vertically straight out of the water.  This behavior is believed to enable the whale to determine what is happening at the water’s surface.
TAIL SLAP – When a humpback raises just its tail (fluke) out of the water and forcefully slaps it back down onto the surface.  This is called a tail slap. Thought to be a warning signal by scientists, it is often done repetitively by the whale in succession.
PEDUNCLE SLAP – The humpback will raise its entire tail out of the water and dramatically slap it down onto the surface.  This is called a peduncle slap.
PEDUNCLE ARCH – Also called a “round out”, this behavior is where you really don’t see much of either end of the whale, but just see the rounded arch of their back as they prepare to dive down below the surface.
BREACH – One of the most spectacular shows provided by the humpback, and one not easily forgotten!  This is when the humpback quickly gains speed below and propels their entire body out of the water, landing back onto the surface with a tremendous amount of splash and resulting wake. Breathtaking! 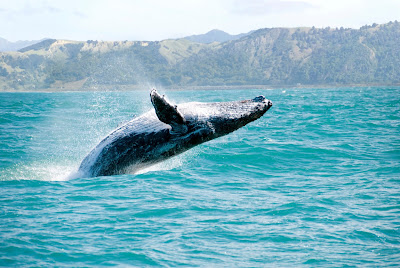 The island of Maui offers numerous whale watching tours, along with the exceptional educational experiences by taking the PACWHALE Eco-Adventures provided by the non-profit Pacific Whale Foundation.
During peak whale season, around mid-January thru mid-April, whales can be spotted from the shore. We recommend using high-powered binoculars for viewing as the whales can be very far off shore. Of course, we think the best way to experience these gentle giants is up close and personal, which you can do by enjoying an unforgettable whale watching cruise.
By Kathy McCartney|2020-03-11T18:33:09+00:00January 18th, 2018|Blog|Comments Off on Whale Watching In Maui