Home/Niihau- The Forbidden Island
Previous Next

You probably are familiar with most of the better known islands in the Hawaiian island chain. But there may be one you’ve never heard of- Niihau.  This remote and pristine island is often referred to as the island where “time has stood still”.
Niihau (Nee-ee-how) is a remote island that is 72 square miles in size.  It is a privately owned island. The island is located southwest of the island of Kauai. On a clear day, you can see the tall silhouette of Niihau rising from the sea as viewed from Kauai’s Kekaha Beach. Niihau is the oldest island in the Hawaiian island chain.

Niihau was purchased from King Kamehameha V in 1864 by the Sinclair family for $10,000 worth of gold.  The purchase was finalized with the understanding that the new owners would honor King Kamehameha’s wish that the island would be a place where Hawaiian culture, language, and traditions would be honored and maintained. The island has been owned by one family since that time. Today, the island is owned by descendants of the Sinclair family, the Robinson family.

Here are 10 interesting facts about Niihau:

1. Niihau has no paved roads, no cars and no hotels, and no telephone service. Some residents (referred to as Niihauans) have radios and televisions, though a lack of services and internet means that these residents must rely solely on DVDs and older VHS tapes for entertainment.

2. On Niihau, residents speak the Hawaiian language almost exclusively in keeping with the wishes of King Kamehameha V, although many do speak and understand English. Emphasis is put on a simpler way of life without the noise and chaos of modern city life.

3. The Niihauans still fish and hunt for their food, with some supplies brought in by air or sea by the owners of the island. Niihauans hunt with ropes and knives, and fish using nets and spears.

4. Due to a lack of a variety of flowers found on other islands, Niihau has become famous for its exquisite, beautifully crafted leis made from tiny shells that populate the beaches of Niihau. Some of these delicate creations can sell for thousands of dollars due to the expert craftsmanship of the Niihauan people.

5. When the island was purchased in 1864, the Niihau people who were already living there were allowed to stay. The island is strictly off-limits to outsiders including those from neighboring islands. The 2010 Census put the island resident number at approximately 170 people. This includes the residents and members of the Robinson family. The occasional guests are allowed if invited by the Robinson family. Because the Robinsons are not required to submit population data, this number may fluctuate as some residents do leave the island to seek employment or opportunities elsewhere, or leave to travel for pleasure or work during the summer months.

6. Niihauans are not required to pay rent.  They travel by bike or on foot and retrieve their water by rain catchments and the use of generators for electricity. Many island residents used to be employed on the Robinson cattle ranch which was eventually shut down in 1999. During that time, they earned salaries, free food, and housing and received education for their children and families. 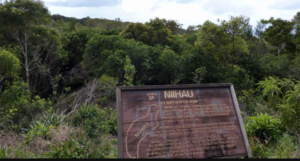 7. Residents are expected to follow island rules set by the Robinsons. Alcohol and guns are not allowed. Anyone caught breaking the island rules can be evicted and asked to not return.  There were earlier reports from a prior resident that the men of Niihau were not allowed to wear their hair long or have earrings, and everyone is expected to attend church on Sunday.

8. Even though access to Niihau is extremely restricted, there are ways to view Niihau from water, or on select parts of the island. From Kauai, tour boats do offer views of Niihau’s beautiful pristine waters with their day-long dive and snorkel trips that head to the Lehua Crater, which is a volcanic “cone” that is north of Niihau Island.  The Robinson family offers very limited half-day guided tours and day-long hunting safaris on Niihau. The guided tour starts by picking up visitors on Kauai by Niihau Helicopters. The helicopter tour starts with an aerial tour of the island, followed by lunch and snorkeling on a remote beach on the island.  Travel by visitors anywhere else on the island is not allowed. The day long hunting safari costs $1,700 and allows a bit more access to safari participants. These tours offered by the Robinson family help support Niihau, but the Robinsons are very careful not to expose the Niihauan people to outsiders or allow visitors near their main village of Puuwai. In a rare interview given by Bruce Robinson long ago, he said, “The tours are solely for people to come to see an unspoiled Hawaiian Island. We will not take them (tourists) to the village or put the residents into a fishbowl-type of situation. We don’t even fly over the village. That is not what we’re about. We respect their privacy, we respect their desire to live untouched by the outside world and we intend to preserve that.”

9. Because of the insulated environment of Niihau, wildlife is abundant. There is a healthy Hawaiian monk seal population along with good numbers of free roaming Polynesian Boar, Hybrid Sheep, Eland, and Oryx.

10.  Sitting atop a 1,300 foot cliff sits a small Navy installation which accounts for approximately 80 percent of Niihau’s annual income. This installation contains remote control tracking devices that are used along with Kauai’s Pacific Missile Range Facility for tracking and training purposes. This income allows the island residents to maintain their way of life and live in peace without the need for industrial development, new technologies, or tourism.

So is Niihau an island sanctuary where time truly has stood still?  Some would call it a paradise where a simpler way of life is enjoyed and one where Hawaiian culture and traditions are nurtured and survive.  However, one view this island, the allure of its mystery and the curiosity it creates for those not allowed to visit will forever carry on.